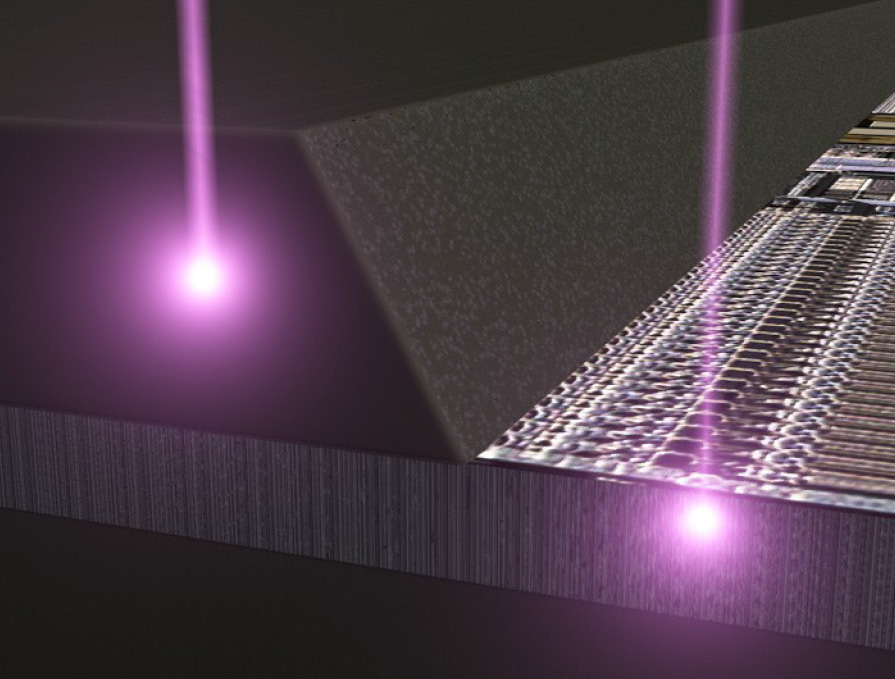 One of the recurring challenges for electronics used in space applications is ensuring that they will have the required robustness to operate for the duration of the mission despite the high radiation levels. Consumer-off-the-shelf (COTS) parts offer the widest assortment of functions with some of the lowest component costs of all the semiconductor grades (for example, consumer, automotive, industrial, military, space, etc.). The warranty for COTS parts does not cover their use in space, and COTS manufacturers generally do not provide any space radiation data. While papers from IEEE Transactions on Nuclear Science may provide some radiation performance data obtained by 3rd parties, it is unlikely that you will find all the data you need to ensure that all the different components in your design are reliable against high-radiation environments. At some point you will need to obtain your own radiation data for specific components.

Fig. 1 Photo of IC die surface revealed by de-capping the mold compound immediately above it. Such de-capping allows ion beams easy-access to the active die surface [3].

Most COTS parts are molded in “plastic” encapsulant or “mold compound” that is composed largely (70 – 85%) of a fine powder of silica (SiO2) or alumina (Al2O3) “filler” used to better match the thermal expansion properties of silicon and reduce mechanical stress between the package material and the die. The majority of the remaining material is an organic, epoxy-based thermoplastic [1]. The mold compound is injected into a mold at high-temperature as a viscous fluid where it flows around the pins, lead frame, and die forming the protective package body when it cools.

For single-event effect (SEE) radiation testing with heavy-ion, alpha-particle, or lower-energy proton beams, removal of the packaging material is often required. Properly done, de-capping leaves the integrated circuit (IC) fully-functional with a large area of die surface area exposed. De-capping the mold compound typically involves mechanically grinding a large fraction of the material above the IC and then applying chemical etchants (usually fuming nitric or sulphuric acids) in the ground depression until the IC surface is exposed [2]. The downside of de-capping is that it requires time, and the process can compromise the functionality of the component being de-capped. A photograph of a packaged IC after the de-capping process is shown in Figure 1.

In theory, we could eschew de-capping if we had access to a beam of ions with sufficiently high energy to penetrate the 0.05 – 1 mm plastic layer thickness above the typical IC in a molded package. Before you celebrate and throw away your grinder and etchants, you should be aware of the caveats; most ion beam facilities have energy limitations for the various ion species so they may not offer ions with sufficient energy to traverse the mold compound. A few offer higher-energy ion beams capable of penetrating mold compound packaging BUT the energy of the ion will have to be accurately modeled to ensure that you are depositing the expected energy into the active layers. For example, if you are interested in testing at LET > 40 MeV-cm2/mg for assuring hardness of electronics for missions in geosynchronous orbit (GEO), you will NOT be able to test without de-capping because heavier, high-LET (see our insight paper that explains “Linear Energy Transfer” or LET) ions are generally not available at these higher energies (CERN is one exception in that the facility has much higher energy ions available but beam time is hard to get). However, if you are focused on Low-Earth Orbit (LEO) missions and have determined that testing with ions of LET 25 -35 MeV-cm2/mg is sufficient to ensure reliability, then it maybe possible to test plastic packaged devices directly without decapping. 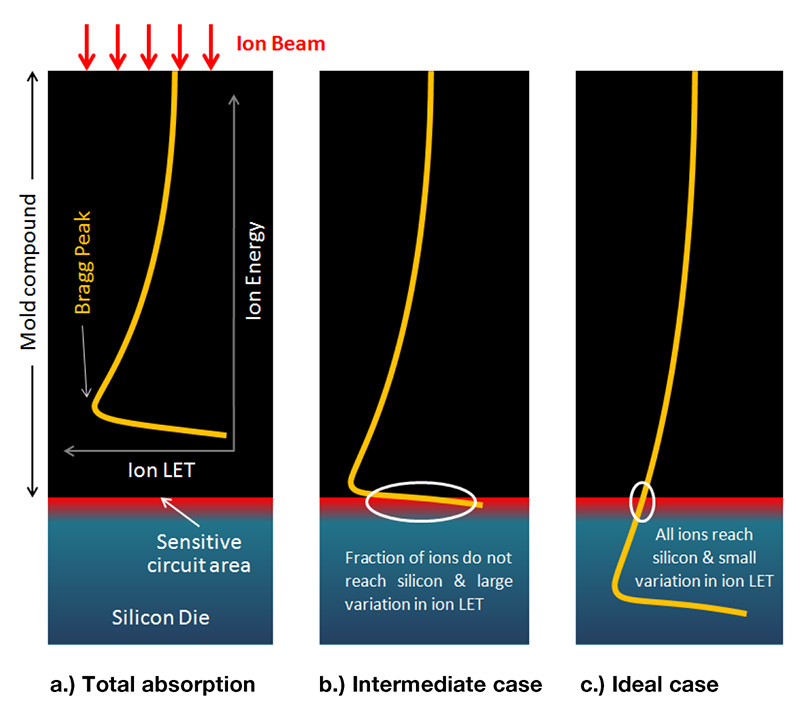 Fig. 2 Ion beam incident on top of packaged IC at three different LETs. The LET vs. energy (yellow) curves and the mold compound packaging material (black) – IC is below (blue) with sensitive circuitry layer (red). In a.) the ions have insufficient energy to reach the sensitive circuitry region. In b.) the ion beam has just enough energy (range) to reach the sensitive circuitry BUT the LET of the ions is not well-defined (can have a large range of values due to the high slope in this region of the LET curve). Furthermore since not all ions will reach the silicon,the actual upset rate will be underestimated. In c.) the ideal condition is with the Bragg peak deep in the silicon so that the LET is well-defined and does not vary too much, minimizing uncertainty in ion LET, and since all ions have sufficient energy to reach the silicon, upset rate estimation is more accurate.

Testing through the mold compound packaging layer poses a major and unique challenge – basically that the user accurately accounts for the ion beam’s energy loss while it crosses the thick mold compound layer. Since all the single-event testing is based on the number of upset events given a certain number of ions incident on the die, it is crucial to model the energy loss accurately. The biggest potential issue related to miscalculations is the occurrence of false negative results. In a false negative test (shown in Figure 2a), the part appears radiation-robust, but actually all the ions are harmlessly absorbed within the package mold compound before ever reaching the die and no upsets are observed. Such a false negative result might lead to the part being validated for use in space when, in fact, it was never exposed to any radiation!

In some cases where the ion range overestimate is not as large, a fraction of the ions might actually reach the die surface (Fig. 2b), so some upsets would be observed due to ions that actually reached the die, but the predicted event-rate for the part would be underestimated since the number of ions assumed to have irradiated the device was overestimated. Another consequence is that the actual LET value of the ions reaching the die surface is drastically different than expected LET. As the ion loses energy while traversing the packaging, its LET changes. This is problematic because LET is not a linear function and it actually peaks at lower ion energies. Without proper modeling it is easy to presume that the test was performed at, say, LET =30 MeV-cm2/mg, when in fact the ion LET was actually higher (usually the LET will be higher since LET increases over most of the ion energy range as energy is lost).

In the ideal case (shown in Fig. 2c), the ion beam will have sufficient energy to easily penetrate the mold compound such that the Bragg peak is well within the substrate silicon ensuring that all of the ion deposit energy in the sensitive circuit layer AND that each ion’s LET will be limited to a small range of values at the target LET. Ultimately, the biggest source of LET inaccuracy is due to the uncertainty of the actual plastic package thickness (from 0.05 mm to 1 mm); thus, it is prudent to slice, at least, one of each type of component to determine the plastic thickness for the device being tested. Modeling of the LET can be done accurately with programs such as SRIM [4].

The advantage  testing without de-capping is to streamline and simplify the entire test process. From a price, time, and yield perspective, testing through the mold compound above the die requires less work; however, due to uncertainty in the package thickness, the sensitivity of physics of ion energy – loss in materials and the lack of higher – energy ion beams at higher LET levels makes radiation testing without de-capping requires time for accurate analyses and measurements of actual plastic thickness to minimize LET uncertainties. Ultimately, given the energy limitations of ion beam facilities available today, trying to do radiation testing without de-capping limits the maximum LET to < 40 MeV-cm2/mg.

In this article we just “scratched the surface” on the issues related with removing packaging vs. just shooting through it for radiation testing. Still unsure on your radiation test protocol? Please contact Radiosity Solutions LLC. We will be happy to work with you on the type of ions to use, on ion-fluence, on whether or not you need to de-cap, and on many other factors that you will need to get right to ensure you get the most from your radiation testing.