What is particle LET? 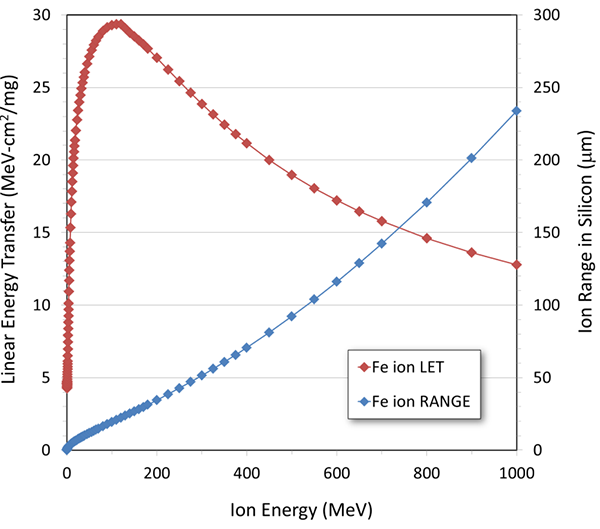 There are high levels of radiation in space – primarily electrons, protons, and heavier ions. When an energetic particle travels through matter such as silicon, it suffers numerous interactions that extract some of its kinetic energy. The energy lost as the particle travels through any material leads directly to the creation of excess charge by direct ionization of the target material (non-equilibrium electron-hole pair production) and the formation of physical damage at an atomic level – the formation of vacancy, interstitial, and localized melting defects. If the particle travels through active silicon and the amount of generated charge is high enough and close to sensitive device regions, proper operation of the IC can be disrupted or destroyed. Thus, an understanding of the particle LET is useful for getting a handle on the level of disruption that a particular ion will produce.

Not all radiation events are created equal. One of the most commonly used terms in single event effect (SEE) testing and reporting is ion linear energy transfer (LET), expressed in units of MeV-cm2/mg. LET is a measure of the amount of energy, dE, lost by a particle by electronic processes (ionization) in a specific material as it travels an incremental distance, dx, through that material. The LET metric is focused on localized energy loss and does not include the effects of radiative energy loss like Bremsstrahlung (gamma rays emitted due to acceleration of charged particles) or delta-rays (secondary electrons). As a side note, another term, the Stopping Power, accounts for all the energy lost by the particle.

Fig. 1 shows the simulated LET (red) and range (blue) for an iron ion in silicon as a function of its energy. An ion with more energy will go farther (have a longer range). As the ion loses kinetic energy, it moves more slowly and has more time to ionize a greater amount of charge. Thus, in going from high-ion energy to lower energy, the ion LET increases until peaking at low energy. Once the kinetic energy drops to zero, the ion is considered stopped and is no longer an issue from a device upset point-of-view. The LET peak is known as the Bragg peak. This non-linear property as a function of the particle energy implies that unless a shield has a thickness sufficient enough to completely stop a particle, it will reduce the particle energy, which may actually increase its LET and its impact in sensitive circuit areas. This effect was seen in TI DRAMs using a polyimide film serving as an overcoat, mechanical stress relief and “alpha-shield.” Experiments revealed that the industry-accepted practice of using thin shields did not block alpha particles but, instead, stopped them closer to active device layers with a higher LET, thus making alpha particle soft errors worse than in DRAMs without shielding [2]. 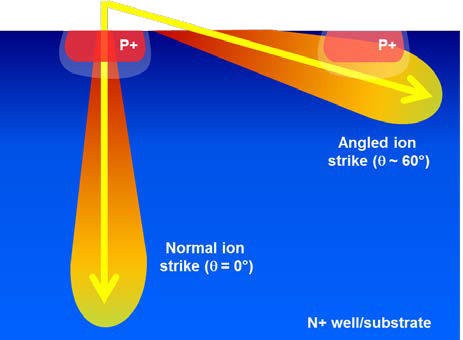 Fig. 2 Diagram of two identical ion events, hitting a junction at normal incidence (left) and at a glancing incidence (right). Much more charge will be generated/collected by the glancing case.

LET is physical property independent of the actual trajectory of the ion (ignoring the special case of channeling effects in crystalline materials). However, since the active layers in most semiconductor devices are constrained to a thin layer at the surface, ions with trajectories closer to these layers (higher angles of incidence) will create much more charge in proximity to the active areas. To account for this angle effect, the inverse cosine law is used to calculate the effective LET (LETeff):

where θ is the particle’s angle of incidence (0° for normal incidence) with respect to the surface of the silicon. Fig. 2 shows two identical ion strikes, one at normal incidence and one at a glancing angle of 60°. Since most of the energy is lost at the end of the ion’s path, the glancing ion event deposits much more excess charge near the junction; hence, its ability to disrupt the device function is significantly enhanced. 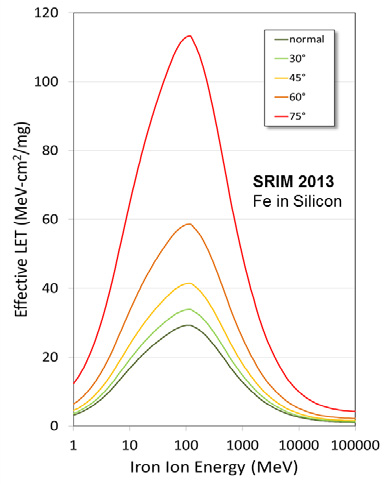 Fig. 3 LETEFF vs. angle –LETEFF increases with increasing angle as the ion’s trajectory moves closer to the surface. Note that LET and LETEFF are the same at normal incidence.

Fig. 3 shows a stopping and range of ions in matter (SRIM) simulation of LETeff as a function of ion angle. Generally, when LET is mentioned in the context of its effect on electronic devices, you can assume that the angle term is included; thus, LET mentioned in literature is actually LETeff. Understanding LET and LETeff is crucial to be able to read a single-event effects report and papers on the topic. Since the particle fluxes in the space environment are often defined as a function of LETeff, understanding this metric allows you to communicate to space customers and ensure that you understand what is needed for new space product designs.

[1] The Stopping and Range of Ions in Matter homepage. SRIM software version 2013.
http://www.srim.org/SRIM/SRIM2011.htm